Scientific Breakthrough for the Treatment of Low Testosterone (LOW T) 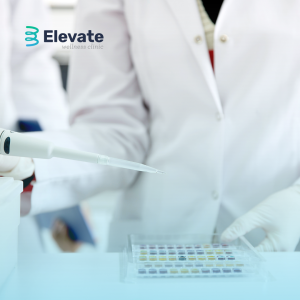 Considered to be one of the best pharmacy schools in the United States, the University of Southern California School of Pharmacy has established itself as a leader in innovation and collaboration for more than 100 years. Led by Vassilios Papadopoulos, DPharm, PhD, dean of the School of Pharmacy, USC researchers have successfully grown human, testosterone-producing cells in the lab, potentially setting the stage for someday treating low testosterone with biologically personalized replacement cells.

Originally published in the Proceedings of the National Academy of Sciences issued on November 12, 2019, scientists describe how they transformed stem cells into functioning Leydig cells. Also known as testicular interstitial cells, Leydig cells are found in the testes and are responsible for the male body’s natural production of testosterone.

In a fairly miraculous breakthrough, USC researchers were able to produce lab grown Leydig cells that not only produced testosterone naturally, but also looked identical to their naturally occurring counterparts under a microscope. In an October 7th, 2019 article published on USC’s News website entitled Breakthrough in testosterone-producing cells could lead to treatment for ‘low T’, Dr. Papadopoulos explains “Our study provides a way to generate possible transplantation materials for clinical therapies, as well as a path toward testing and developing new drugs.”

Low testosterone (low T) affects millions of men throughout the United States. Testosterone is an important hormone in the human body, and it naturally starts to decrease each year after age 30, which impacts mood, fertility, sexual function, obesity, and bone density. Testosterone replacement therapy is considered by most mainstream professionals as the best approach for treating and reversing the symptoms caused by Low T.

Countless men who have had symptoms of low testosterone and have treated it by visiting one of many reputable testosterone replacement therapy clinics have reported an improved sense of well-being, increased energy, weight loss and significant improvements in libido and erectile function.

Today, testosterone replacement therapy is typically injected, taken orally, or applied as a cream; however, in recent years, there have also been developments in a field called subcutaneous bioidentical hormone replacement therapy (BHRT) – a process where pellets which are implanted under the skin and designed to release a steady and consistent flow of testosterone into the body. In a large degree, we see a lot of people searching “bioidentical testosterone pellets Atlanta GA,” however, we suggest caution when using this approach to TRT. Obviously, it is more invasive and is therefore potentially more difficult to reverse if dosing is not dialed in properly.

While USC’s breakthrough shows some real promise in the field of low testosterone treatment options, human transplantation of lab grown Leydig cells is still years away from being an option for men that are suffering from the symptoms of Low T.

Posted in Low Testosterone Therapy
Back to News Hub